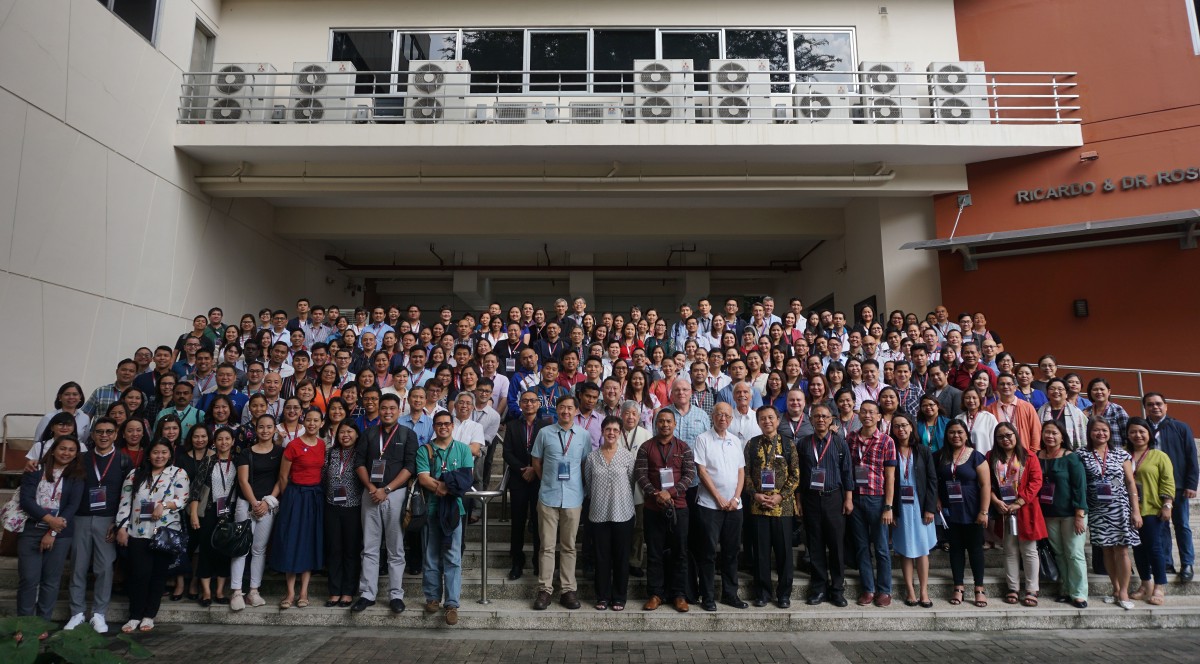 The conference on Educational Frontiers at the Ateneo De Manila University from 3rd– 6th of October 2018 opened with a presentation of scientific research on The Truth about Youth by Gino Borromeo. While this presentation outlined the significant characteristics of the millennial generation who are media-savvy and ecologically concerned, it failed to draw attention to crisis parameters such as the high level of obesity among modern youth while noting clearly their lack of political engagement.  The epidemic of obesity is surely a manifestation of a deeper relational disorder in families than those we have witnessed in previous generations. This conference on the first day was followed by three break-out sessions, or workshops.

A workshop from the Sanata Dharma University in Indonesia showed how both Muslim and Christian students can follow a common course when the topics are sensitively chosen.  In this way, they can learn about the other traditions and appreciate the goal of religious harmony in society. In the afternoon, the Institute of Catholic Leadership from San Francisco University led a reflection on how to serve the marginalised children in disadvantaged parts of the globe by supporting the education of their teachers.  Another workshop showed how drama can be used to encourage positive discipline with students who are troubled.

The second day began with a conference on Intercultural Education by Dr Christine Halse from the University of Hong Kong. It was interesting to notice that research backs up the observations that children who learn in an intercultural setting do better academically and relationaly than children who learn in a single cultural setting. However the question and answer session indicated that this intercultural approach has difficulty integrating former majority groups who feel oppressed or victimised. In particular, real challenges are being experienced in engaging with traditionalist or conservative communities.

I attended the workshop “Learning and Teaching Laudato Si in a Cultural Context”.  It outlined how all our other educational challenges have now been subsumed under this primary ecological concern. We will either collaborate to reduce global warming or we will leave a desolate world to the next generation. As the presenter from Timor Leste had become ill before departure at the airport, I was asked to replace him by giving a presentation Communal Discernment and the Xavier Jesuit Education Project in Cambodia.

Two of the workshops that I attended on the third day will stay with me for a long time. The first was on coaching of new teachers on the job in Reflective Pedagogy (Ignatian Pedagogy). The fascinating and innovative aspect of this workshop was that it showed how teachers with limited experience in the school can become helpful mentors to new teachers.  The model is still the Spiritual Exercises of St Ignatius where the vision, mission and goals of the school become the truth to be known and loved by the new teacher and the coach is the spiritual advisor who helps empower the new teacher to become the teacher that they are meant to be rather than a clone of some other teacher.  This happens not according to some preconceived standard of good teacher but in a spiritual process where the new teacher both appropriates the school culture and at the same time realises his or her own personal style and charism as a unique teacher who will be irreplaceable.

This workshop was followed by another interesting one on “Mindfulness”.  The person responsible for student discipline in the large Xavier School outside Manila explained how she had introduced mindfulness programmes into the school.  One reason she did this was her conviction that students with discipline problems were often not present to the situation so they did not realise how disruptive their behaviour actually was.  Another reason was that so many students and teachers complain of stress.  The invitation to all students to disconnect from every outside stimulus for three minutes silent time at several moments each day seems to have helped calm people down significantly.  The program is easy to prepare as it involves few words and peaceful music.  It works best if the teacher leads the programme in class.  Students are free not to participate but they must be quiet for the duration.  It is not religious so the program can be used for all students.

The Ignatian Paradigm in Student Formation

On the final day of the conference, Fr Michael Garanzini expounded on the Frontiers in Jesuit Education. He underlined the centrality of the study of the Humanities for the development of practical wisdom and moral conscience. He highlighted the extent of the worldwide Jesuit network of schools, colleges and universities.  He lamented the lack of collaboration in responding to the challenges of the modern world.  However it was noted that graduates of these schools do not resemble each other nearly as much as do Jesuit novices from different countries. The graduate from Sogang University in Korea will be quite different from the graduate of the Ateneo De Manila in the Philippines, yet the Vietnamese Jesuit who has never traveled abroad will share a similar world view to the Jesuit from El Salvador even if neither has ever met anyone from their respective countries.

In this sense the formation of lay people following the Ignatian paradigm may not be as deep as the formation of religious people.  This issue was not addressed at the conference.  However it was also clear that despite all this common formation and understanding, and notwithstanding the huge progress made in collaboration with others in recent years, Jesuits who understand each other well still have difficulty in collaborating together on apostolic projects.  Fr Garanzini confirmed that this has always been and still remains a huge stumbling block to the effectiveness of Jesuit educational programs. It is somewhat painful to realise that the principle challenges to our apostolic effectiveness in education are not really external at all.  They are internal.  Our context in Cambodia is perhaps no exception to this general rule.

Spiritual Insights and the Catalyst for Educational Reform

Hence this conference served to confirm the key spiritual insights about emotional sobriety that I gained during my sabbatical last year in France and Ireland. These insights concern our current efforts to help transform the Cambodian education system.  These insights are somewhat controversial so I hesitate before sharing them. My next blog will be entitled “Catalyst for Education Reform in Cambodia”. In this future blog, I will share these concerns for further reflection and dialogue.